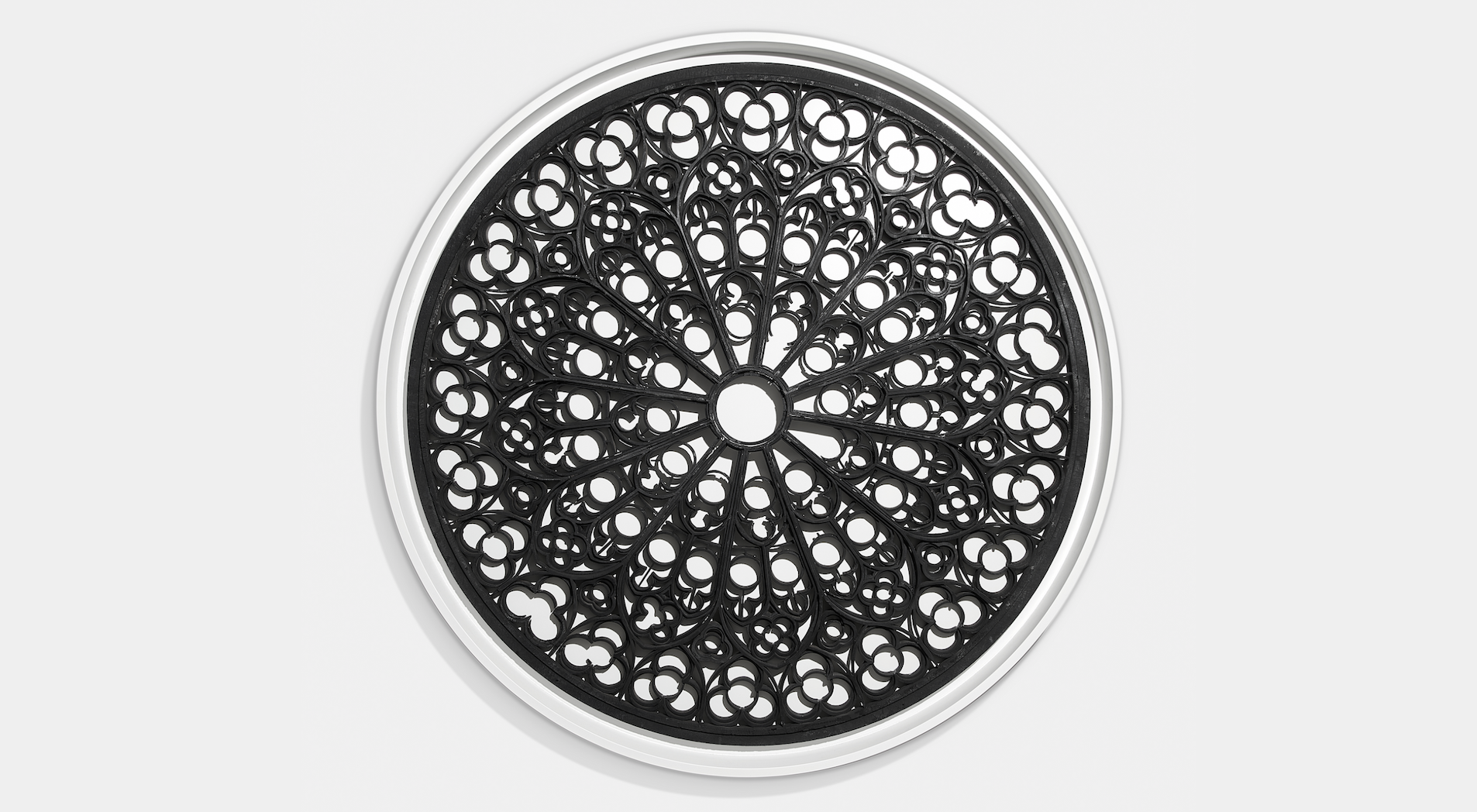 If dark times can help anyone transform into something new, they certainly have done so with artist Jani Leinonen. The artist famous for his exploding colors and humorous viewpoints has taken a turn to the abyss. And it is dark in there.

In his new exhibition at Zetterberg Gallery, Leinonen is putting on display destroyed objects that he has collected from buildings that have burned down in accidental fires or arsons. The exhibition is visually and conceptually one of the grimmest exhibitions by the artist, almost completely black, with only glimpses of color sparkling in the corners of some of the pieces. There is a slight scent of cinder in the air – reminding us that the works have truly been ruined by fire.

The exhibition view is dominated by two large religious-looking sculptures. The biggest one is an oddly familiar round shape, with breathtaking ornaments that have partially collapsed in the fire. It does not take long to realize that the shape is the rose window of the church of Notre Dame that burned in 2019.

Leinonen is known for implementing thought-provoking texts in his artworks. However, this exhibition is an exception. The practically pitch black exhibition only contains one clearly readable sentence: “forgive them for they do not know what they are doing”. The words of Jesus are engraved into a wooden window frame of a church in East Village, New York, that burned down last year.

Next to the religious iconographies, there are also national, financial, and cultural symbols of prosperity – all burned to ashes. A golden coat of arms of Finland, a fancy Goldman Sachs’ corporate sign, and a decorative mirror from a bourgeois home have all incinerated in fires around the world. This obscurity in the history of the objects gives us no clues whether we should feel loss or empowerment for the annihilation of these objects. Perhaps it is best to feel both. Sadness with a glee, anger with compassion, confusion with a hint of satisfaction for these symbols of power being obliterated so beautifully. It feels like some of the objects deserve to be burned, but for others, it feels like sacrilege.

Leinonen’s Things We Lost in The Fire opens at the same time as the artist’s impressive installation The Truth at Serlachius Museum. Leinonen has constructed a miracle inside the museum by bringing a burned-down chapel with miraculously intact and colorful stained glass windows. The works at Zetterberg Gallery continue where the museum show ends, making the stories behind these burned buildings and objects deeper, more complicated, and more real. Leinonen leaves us with more questions than answers.

After years of emphasizing his agenda, it seems that Leinonen has learned not to point it out, leaving us to decide for ourselves what will arise from these ashes. It doesn’t make the viewers’ task any easier, or more comfortable, but perhaps it makes it more interesting.

As gods of fire we walk the earth

The titan Prometheus stole the divine fire from the Olympus and gave it to humans. Fire was civilization, fire was creation, but fire was also destruction. Fire was control and independence, fire was chaos and fear. Fire was development, opportunities and new forms of arts and skills. For receiving this gift, humankind was punished with all the misfortunes and diseases of the world and was thrown out of paradise, to never again walk alongside the gods, the moment Pandora’s jar was opened.

At the bottom of the jar, there was hope. The hope emerged as a consequence of the fire.

With fire, humans began to burn the earth, the air, the animals, and each other. We surpassed the gods – then we forgot about them. Wars and revolutions are born out of fire. One thing perishes and burns out in favor of something new. We are driven by burning hatred, by burning dreams, by burning hope. No longer do we associate fire with opportunities and creation. Today, the fire of creation is hidden behind factory walls and in machines, so we no longer see it. And so, we no longer pay any special attention to it. Today we see the fire in burning cars and forests, in rebellion and indifference. Fossil and dying.

Then it all turns black and quiet. Until we find hope at the bottom of the jar – until a new titan enables us to surpass the gods again.

Out of the ashes grows new life. Metamorphosis is a frightening thought, and that something is going to die is a terrifying thing. We do not know what comes after the fire. What burns gives life to the soil and from the ashes the ancient Phoenix bird arises. Nothing can last forever, neither nations, banks, nor religions. Mythologies create narratives that give us a sense of unity, meaning, and purpose. We believe devotedly, if not in one, then in the other. We firmly believe while seeming to have forgotten about hope. Mythologies emerge, live, and die. What we once believed in, is now a superstition, and what we believe in today will one day raise eyebrows. We are all going to die and perish, and our thoughts and spoken words will disappear. Yet, hope will live on. Like the burning love for life that we cling to. But what is formed in the fire, in the heart, will endure – as will art.