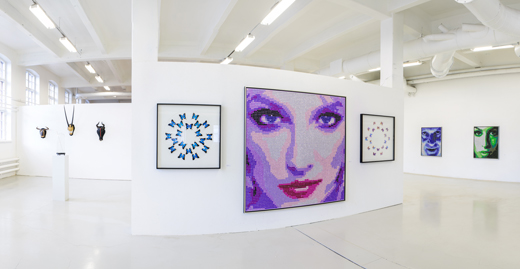 The exhibition Delirium presents for the first time a complete overview of Mari Keto’s work; the portrait series of spectacular pop icons in colourful rhinestones, the hunting trophy works and the micro worlds of the dioramas inhabited by skeletal angels, fairies and mermaids in precious metals.

The exhibition title Delirium refers to a condition where one loses ones grip of the world, a dizzying slip of meaning rendering it impossible to distinguish between real and unreal, fact and fiction. Two central themes run through Keto’s art, the glittering surfaces of temporary pop mythology and the hunt; death rearing its head almost everywhere.

With her images of pop icons Keto is looking into the core of our culture’s obsession with celebrity. We see fame emerging as a thing in itself. The insistent faces have a power, a vector that captures something essential in the celebrity fixation of our time.

The undecidability of who is cheating who is the ambiguous position established by the works in the series called Fashion Victims. The relationship between hunter, victim and trophy is unclear. We buy brand value and invest it in ourselves fully aware of the price. Luxury is a trap that we gladly step into. We even skin ourselves to afford to do so.

Trophies are in their nature aestheticized death. Death is most clearly manifest in Keto’s works with skeletons of mythological and fantastic creatures. In small cabinets of curiosities the little creatures have been locked up and left to die. Did we forget them? Did we lose faith? Or did we trap and kill them with our logic and science? A contemporary disenchantment has taken place with fatal consequences.

Keto’s works balances both references to the tradition of memento mori going back to the Middle Ages as well as references to pop art of the 60’s and 70’s. Keto’s works are often inscribed narratives structured by symbolic elements. The Modern images of vanities seem to suggest that celebrity is the folklore of our time.

Keto’s classical training as a jewellery artist is apparent in her use of materials and in the extreme precision of their execution. The perfect finish imbues the stories of the works with gravity. The materials are often in themselves laden with meaning.

The Oxford Dictionary defines delirium as “an acutely disturbed state of mind characterised by restlessness, illusions, and incoherence”, this is what Keto’s works seem to point to in our world. The dictionary also holds a second meaning for the word delirium as “a state of wild excitement or ecstasy”. It is this second meaning that radiates from Keto’s sparkling and glitteringly perfect works.

Mari Keto’s portrait of Her Majesty The Queen Margrethe II of Denmark, ordered by the Danish Royal Collection will also be displayed at the exhibition.

Zetterberg Gallery presents TEASER – a selection of works by the most influential young Finnish contemporary artists. Founded in 2008, the gallery Zetterberg Gallery is showing the highlights of its programme at Salon Dahlmann Berlin. Combining a critical perspective and meticulous craftsmanship with a humorous and aesthetic treatment, the works of Jiri Geller, Mari Keto, Jani Leinonen and Aurora Reinhard explore the boundaries between constructed, commercial culture and individual, materialistic addiction. TEASER presents these prominent Finnish artists by composing a strong body of works from international private and institutional collections. By including elaborate sculptures, accusatory installations and tenacious imagery, the exhibition provokes observant attention to the prevailing phenomena of society.

Jani Leinonen throws light on the tactics of commercial operations by turning them into objects of ridicule, parodying the unstated assumptions of our marketing society and economic daily life. Jiri Geller’s accomplished, detailed sculptures serve up cold irony and raw critique by questioning the dominant, neoliberal iconophilia. Aurora Reinhard creates controversial artworks that explore tensions and structures in contemporary society – in particular our obsessive representation of gender and female sexuality. Mari Keto focuses on the tensions and structures of our contemporary culture by using predominantly diamonds, crystals, pearls and other materials used in making jewelry to depict icons and symbols in her delicate installations and portraits.

Overwhelming details, offensive décor, punchlines we do not want to acknowledge. The works of Mari Keto and Jani Leinonen put us all into cold sweat.
In Mari Keto’s works the conceptual underpinning and high degree of craftsmanship merge into an artwork. Keto explores the tensions and structures of our contemporary culture by portraying icons and symbols predominantly surrounding us. The fierce stare of a lost Joker Face arrests the attention with an unpleasant recognition of the decomposing moment.

Jani Leinonen attacks symbols and marketing strategies, turning them into objects of ridicule, clichéing our agreed marketing society and economical everyday. With these strikes Leinonen unfolds the chain reaction we all are voluntarily involved and plays up the iconographies of the global brand land.